Grenoble Ecole de Management (GEM), proved its commitment to society on February 25 by becoming a ‘Société à Mission’ Similar to a Benefit Corporation status, it is defined as an organisation whose purpose and all its operations are focussed fully on making a positive difference within wider society and the environment. Read more on this positive step forward.

On February 25, GEM's Board of Directors unanimously voted in favor of changing the school's status to a 'Société à Mission' under the French PACTE Law. GEM has now become the first Grande Ecole Business School in France to make this transition and to fully engage in its long term commitment to society.

GEM puts its commitment into action

The PACTE law (action plan to drive business growth and transformation) was enacted on May 22, 2019, as part of the French government's desire to challenge the role of companies in society and to provide a framework for transformation, growing and job creation. Approximately 100 companies in France have stepped up to the challenge, including MAIF, MACIF, Les Echos and Yves Rocher. This decision sends out a clear and public message on GEM's commitment to its social and environmental goals, engaging with its stakeholders and adopting the principles of transparency outlined in the PACTE law. The Société à Mission' status brings additional responsibilities for GEM, including audits by an independent third-party organization every two years.

As part of its commitment and responsibility to its ecosystem, in its 2020 – 2025 strategy, GEM defined that: "Through education and research, they seek to provide responses to the challenges related to the ecological, societal and economic transitions and to contribute to a world that is more resilient, more just, more peaceful and more responsible"

" An organization's purpose reflects how it intends to serve society's needs and outlines the challenges that the organization has chosen to address."

GEM has therefore set itself a new "positive challenge" in becoming a 'Société à Mission', and has defined major social and environment goals as an integral part of its 2020-2025 strategic plan. All these objectives mirror the sustainable development goals (SDGs) of the United Nations. 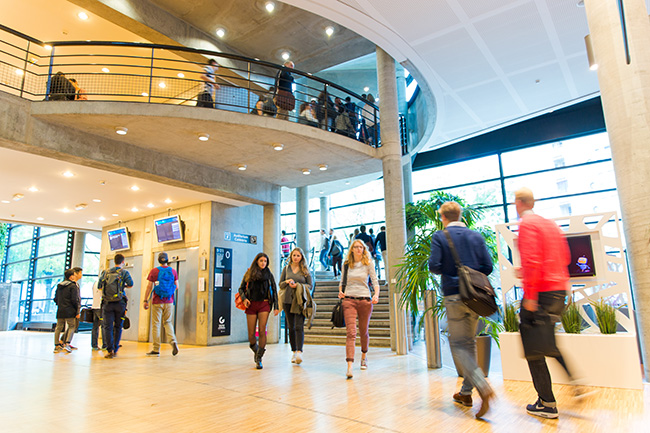 These objectives are outlined in the GEM Manifesto for a Sustainable Future. The GEM Manifesto was co-created by GEM staff, students and associations as part of the Sustainability Committee. In the creation of this manifesto, the GEM Sustainability Committee decided that these five objectives that would guide all of GEM's actions moving forward. A Mission Committee will be responsible for monitoring GEM's achievement of these five objectives. The committee will include 80% of external stakeholders (French and international) and will be chaired by Olivier Blum, a 1993 GEM graduate, Chief Strategy & Sustainability Officer at Schneider Electric* and a member of the Executive Committee.

To ensure that these objectives are achieved, GEM has invested €7.5 million in these for the next five years (more details on these 5 objectives can be found at the bottom of this page):

GEM agrees to act ethically and to defend people's physical and mental well-being by refusing any behavior or speech that undermines each individual's rights, health and dignity (SDG 3).

GEM agrees to defend the right to be different, encourages diversity and opposes all forms of discrimination, especially by ensuring equality between men and women (SGDs 5 and 10).

GEM agrees to promote access to high-quality education for all, while promoting inclusion and equal opportunities (SDG 4).

GEM agrees to promote solidarity and the principles of economic peace, and to fight against all forms of corruption and violence (SDGs 11, 16 and 17).

GEM agrees to recognize the environmental emergency by actively working to prevent global warming, protect natural resources and biodiversity through its Zero Waste ambitions (SDGs 12 and 13).

* Schneider Electric is the most sustainable company in the world according to Corporate Knights.