The European energy market has undergone a long process of liberalization. Yet despite this fact, many European countries report limited changes in terms of customer contracts. A recent study underlines the various factors that encourage or limit a customer’s desire to change contracts.

Your research analyzes the liberalization of the energy market. What did your study explore in particular?

In 1996, a European directive initiated the liberalization of energy markets, and in particular the market for electricity. The goal was to increase competitiveness and the choice of suppliers as well as promote attractive prices for customers. Many studies have already explored a customer’s willingness to change electricity suppliers. All of these studies underline the inertia of customers who are afraid to change suppliers.

Our research focused on the variable that is the contract between customer and supplier. We compared three types of profiles: no change of contract, an internal change with the same supplier and changing suppliers (external change). Previous research didn’t make a distinction between no change and internal change. That’s the particularity of our study.

Your study analyzed data from eight countries: Germany, Spain, France, Italy, Poland, Romania, the UK and Sweden. Can you explain the research process in greater detail?

The study was carried out in the summer of 2016, or 20 years after the European directive of 1996. Using data from eight European countries, the study collected information about changes in contract over the past 10 years. The eight countries selected for the study represent approximately 80% of electricity consumption in the EU.

13,000 customers participated in the study, in other words almost 2,000 customers per country. We analyzed the motivations, constraints and fears that impacted a customer’s desire to change contracts and/or suppliers. We also collected a lot of data about households, education levels, income, housing situation (renter or owner), and whether or not the contract change was done when the customer was changing homes.

What are the principal conclusions in terms of customers?

In general, customers are influenced by financial gain, a higher level of education and income, environmental concerns, a change in housing, a variety of available suppliers, electricity prices, and a tendency to take risks. All of these factors can encourage a customer to change contracts. We noted that people with low income tend to not change contracts while renters tend to change less than owners.

In terms of external changes, we were surprised by the results. Participants who tended to avoid risk also tended to change suppliers. A possible explanation for this is the two year price guarantee that is often included in such changes, which in effect limits the risk.

For internal changes with the same suppliers, environmental concerns were the determining factor, most likely due to a desire to choose “greener” energy. This factor will be confirmed in a future study.

Based on these results, what is your advice?

For established suppliers like EDF in France, the recommendation is to offer a greater variety of contracts, in particular contracts tied to green energy. This can encourage environmentally concerned customers to change contracts yet stay with the same provider. EDF doesn’t need to compete in terms of price given its performance on a European level: 16cents/KWh.

For new players, the key is to compete in terms of price all the while reassuring customers of the long term viability of their offer. According to our results, they will not switch towards Enercoop for example (a Netherlands cooperative and the European leader of green energy). ENI on the other hand stands out on the French market by offering contracts that are 3% cheaper than the regulated price and a 3 year guarantee freezes the price (unless prices drop below the fixed rate). According to our study, this is a winning strategy. 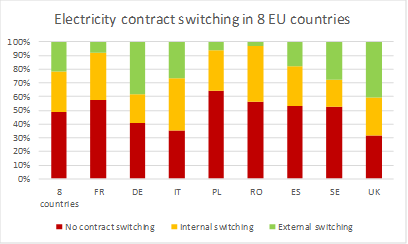 As illustrated in the table, there are few changes in terms of suppliers. France is at the same level as Romania, Poland and Spain, all three of which also have regulated markets. The percentage of internal changes are also average. The results confirm that markets with low regulated prices like in France and a high concentration of suppliers tend to limit the propensity towards change. As a result, structural factors are important. Regulated prices discourage competitiveness. In terms of public policy, the regulation of prices limits the development of a competitive market. For example, Sweden and the UK (with similar prices as France) demonstrate that it's possible to have low prices even if they're not regulated. These effects are directly caused by competition.